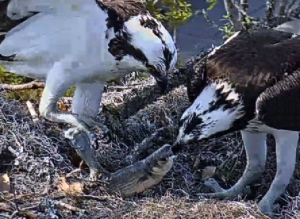 Welcome back to the 2017 Landings Bird Cam – this year featuring a pair of Ospreys. The first egg was laid on Monday March 27 at around 7:00 am. An interesting fact about Ospreys is that both the male and female have a brood patch and both share duties of incubating the eggs.

These birds are magnificent fishermen, able to catch and carry fish weighing as much as two and a half pounds – about 1.1 kg!

Here’s a shot of him (left) bringing a striped bass (we call them stripers) to her. Because their talons are such great fish hooks, it’s actually difficult to let go of the fish! She’s tugging at the fish and finally he’s able to get his talon loose. 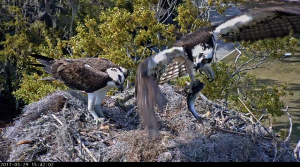 Once she’s taken the handoff, she gets a good grip and then heads over to a nearby branch to eat her afternoon snack in peace. Meanwhile, he checks out the egg and settles down over it to keep it warm until she’s had her meal. 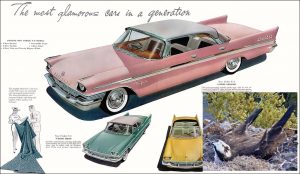 Someone mentioned that when she was brooding, her wingtips looked a bit like the “tail fins” on cars back in the 1950’s. Here’s the 1957 Chrysler that I think they might have been comparing her to!

We would like to give a big shoutout to Ms Patterson’s kindergarten class at James Island Elementary School in Charleston, SC. That’s just up the coast from Savannah and we’re glad to have them following this brand new species of bird. It will be interesting to see the differences and similarities of the Owls and the Ospreys as they care for the eggs and chicks. Stay tuned!

And finally, here’s a webpage with a good fact sheet on ospreys