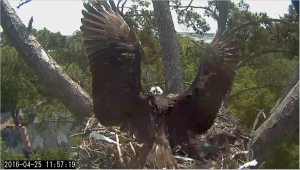 So what’s up in the nest? The owls are still in the area, but if last year is any indication, they may not be actually spending any time in the nest now that the two owlets are both confident flyers.

Mom was last seen in the nest on Saturday night around 8:00, and we haven’t seen the owls since.

However, today (Monday) at noon, a couple of Ospreys showed up and 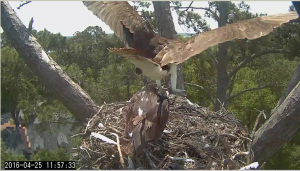 spent about 40 minutes checking out the view. This also is similar to last year, as the following goldie-oldie post shows. To the right are today’s photos as first one, then
another Osprey land and spend some quality time in the nest.

And below, take a look at this post from 54 weeks ago! It’s Deja Vu all over again!

The two osprey have visited the nest at least a couple of times this morning and between 8:30 and about 9:10 were seen together bringing in new nest material. When the second osprey arrives with a huge load of spanish moss, it gets caught on the end of a new stick that they have apparently added to the nest. Both of this pair seem to think this is a pretty good site. Now we just need to have them start picnicking here. I’m thinking sushi or sashimi would be a great sign!

And for those of you who are unfamiliar with the osprey, here’s some literally unbelievable footage from ARKive.

ARKive  http://www.arkive.org  is a unique global initiative, gathering together into one centralised digital library, films, photographs and audio recordings of the world’s species.