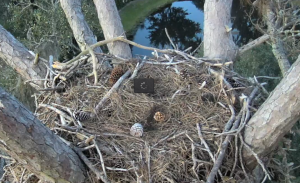 Mom’s apparently decided to do something about the forked stick that’s been impinging on her as she incubates the eggs since January 1 when the first egg was laid. In the image at the right, above the left hand side of the nest, you see a long forked stick leaning across or spanning three large branches of the tree.

That stick was placed there by our bald eagle sometime in September after returning to the nest as a solo. Later the eagle spotted the owl’s indentation in the nest and filled it in, smoothed things out, and moved that large stick over the place where the indentation was. Seems like he/she didn’t like the modifications to the nest.

The stick is forked, and every time mom tried to move it, it would just rock back and forth. She would move the part on the right in front of her face and the other part would then stick her in the ribs. She’s tried to gnaw it away, but finally in this video she picks it up and gets it out of the way. Way to go Mom!