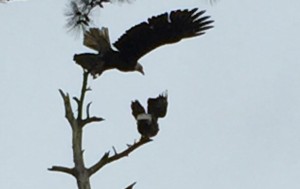 So to recap events, we had a lot of activity in the nest in mid-October, with two GHO’s in the nest every day, usually close to dusk or dawn, but sometimes mid-day. The last time we saw them in the nest was October 19, although they have been heard near the nest multiple times since then.
Meanwhile, a pair of bald eagles has been seen in the area many times. Below are two pictures from made by Doug Ramey with his phone as he was playing a round of golf on Oct 5. Then Tuesday (Nov 3) I got an email from Chris Steigelman, the Director of Golf Course Maintenance, South, telling me that 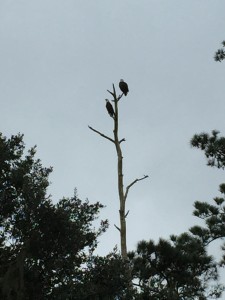 Remember that last year we had both owls as well as a single eagle interested in the nest in October, and then just sporadic activity until early December when the owls got very serious about the nest.