Mea Culpa for not keeping everyone in the loop on the status of the camera. The bottom line is the camera is down and we’re not sure whether we can get it working again from the ground, or if we need to rent a lift (about $1,000 expense!) and go up the tree to try to fix things. Since we can tell that there’s power up at the enclosure (it’s alive, but not well), we have a few more things to try before considering the lift.

And of course, we don’t really know if the nest is occupied! The two Ospreys were frequent visitors to the nest up until April 15th, and I haven’t seen them since. However, with the camera down, we really don’t know for sure. One thing we do know is that the owls seem to be doing fine. Each time I visit the site I see one or more of them. The last time a few days ago, while staring at the equipment in the ground box, one of the young owls flew by me about 20 feet away, from just above me to a spot in a yard across the fairway. There was a small bird harassing it but not really bothering it, and a little later it flew back as I watched, too surprised to pull out a camera!

A couple of days earlier I spotted the two young owls in a dead tree that is a favorite Bald Eagle perch. As I observed them from a couple hundred yards away, an adult owl joined them in the tree. I presume they were getting set for a night of either learning to hunt, or waiting to see what Mom could find that they could eat. They all looked robust from a distance.

And here’s the last screen captures I’ve got of the two ospreys arriving at the nest on the morning of the 15th. They sure looked like it was theirs!

So stay tuned and we’ll try to be a bit more communicative in the future! 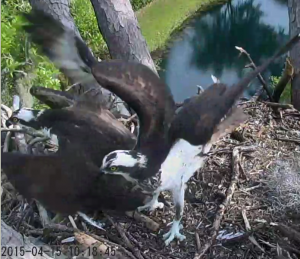 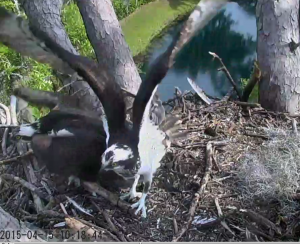 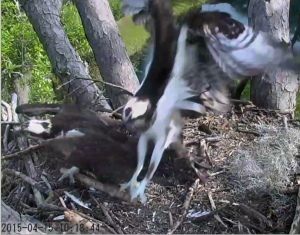 Oh, and that’s a Carolina anole (aka green anole, aka red-throated anole, aka American anole) in the fourth picture above. Anole rhymes with cannoli or guacamole depending on whether you’re into appetizer or dessert illustrations. The red disk below his chin indicates he’s a male in search of a female. He inflates the disk and pumps up and down like he’s doing pushups. I’ve learned that these arboreal lizards  are very territorial and will fight to defend their territory. As I encouraged one to leave our house the other day with the aid of a broom and a fish net, and was slowly herding him across the patio towards the lawn, he finally decided he’s had enough and turned around and bit the broom. Needless to say, the broom wasn’t impressed as the anole is only about 4 inches long and doesn’t seem to have any teeth. However, if the broom had been a moth, that moth would have been history!

Their territory typically has one male and a couple of females, and is about a meter cubed. That’s right, standing in the middle of his territory, this critter could be a mere 18 inches from the male in the adjacent “territory”. (1)