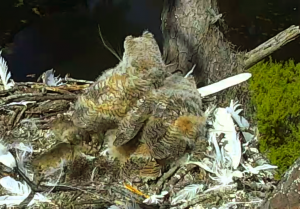 It’s April 4th, 2016. Last year, the first gretgg was laid last year on January 1, and this year the first egg was laid on January 23. To see the details and a comparison of the two years, go to our education page and click the milestones tab to keep track of this, but here’s a snapshot what may be ahead:

Last year, our first owlet began branching (moving out of the nest onto limbs, and then usually “flying” back down to the nest) last year 77 days after the egg was laid. If the exact same trend follows this year, the first owlet will be branching about April 9th. But there’s a very good possibility that these birds will be experimenting out on the branches a few days earlier.

Also, note in that milestones tab that the birds left the nest only about 10 days after beginning branching, so we all need to keep a close eye on these little guys – they grow up so fast!! Here they are this afternoon sunning and stretching in the beautiful sunshine. They might begin branching within a week or so!!

The white Great Egret feathers in the nest are a reminder of the fact that it’s a very tough world out there. There is a Great Egret rookery less than a mile from the nest. The egrets congregate in the rookery so that they can collectively protect themselves and their young while nesting.

The Great Horned Owl is an apex predator, which means that they are at the top of the food chain. There are birds (the Bald Eagle, for one) that could beat them in a fight, but in general, other birds do not hunt the GHO – the Owls are too powerful and too tough for the other bird to be willing to risk their own life by being injured in a fight.

Our nestlings aren’t yet at the level of top predator, however, and even after they leave the nest, the parents will stay in the vicinity for several months, showing them the ropes and teaching them to hunt on their own. Last year, we could see them in the surrounding trees for weeks after fledging. So stay tuned – the best part of the show is on the air for the next two or three weeks!!! 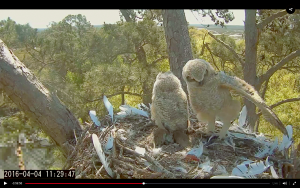